Although it must be said that women are just as likely to buy it, as are the men, particularly for its power under the hood.

The new Kluger has six models to choose from 3 in the AWD line up and 3 in the 2wd line up, marketed as the Highlander in other markets, is one of the most popular family-sized vehicles Down Under that actually has 7 seats, thanks to its versatility as a people-mover and a van in one.

Plenty of room in the rear

And with regular updates on its interiors, exteriors and engine, its status as the third bestselling car in the saturated SUV market is as strong as ever! Only the Ford Territory and the Toyota Prado beat the Kluger at the game but things can easily change so may yet see it reigning the field.

Admittedly, the Kluger will not win car beauty contests but this is not to say that it is ugly, far from it, but that it lags in the beauty department with the likes of the Territory and the Prado. Fortunately, what it lacks in outstanding beauty in the exteriors, it more than makes up for in its great interiors, driving performance, and handling capability. 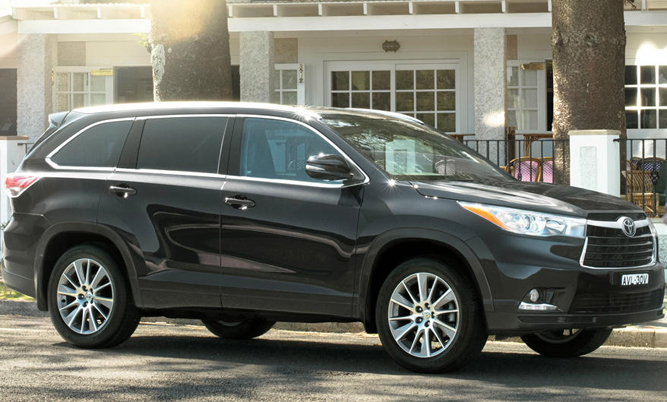 Facelifts also keep the Kluger updated with the times, rolling on 18″ Alloy wheels, and 19″ on the AWD Grande, adding a stylish flourish to the bonnet, bumpers, grille, front guards, tail lights, headlamps, and door mouldings. The standard exterior features of fog lights, power mirrors, and remote boot/hatch release interior add to its appeal.

The Kluger is a sizable vehicle – 4865mm in length, 1925mm in width – so parking in tight spaces will require skill. But it’s not as big as the LandCruiser so it should be easier to handle even for dainty individuals.

The Toyota Kluger is a sporty utility vehicle with versatile uses. The Japanese car manufacturer certainly understands the varied uses that its customers have for the vehicle, thus, the clever design touches that make the Kluger both a people-mover and a van.

The interiors are certainly roomy, a must considering that there are seven seats on the entry-level GX 2wd model. The second row can be slid forwards and backwards for more space, not to mention that it allows for individual seating with 4 bottle/cup holders, armrests and centre table. Travelling in style – or more precisely, Gold Class style – is a joy indeed!

Legroom is as spacious, too. Add on the individual air-con vents and 6 speaker, touch screen audio system that includes Bluetooth connectivity so all the passengers will travel in comfort even on a hot summer’s day. 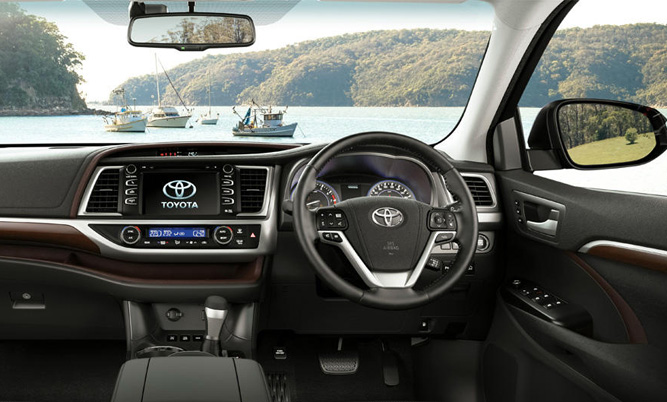 Spacious interior of the Toyota Kluger

Safety is not an issue, thanks to the full suit of safety systems. Included are vehicle stability control, anti-locking brakes, 7-SRS airbag package, and traction control, among others.

Smooth Driving With the V6 Engine

Of course, any family sport utility vehicle like the Toyota Kluger will be judged not just on what can be seen but what also lies under the hood. Inadequacies are few and far between here, thanks to the robust 3456 cc v6 petrol engine with 201kW of power at 6200RPM and 337Nm of torque at 4700 RPM.

The result: Speed of zero to 100 kph in 8.2 seconds that despite its size of 2670 kg is as impressive as you can get from a vehicle of its kind. The smooth-revving engine means near-total quiet inside the cabin, which is a plus when you have noisy kids and adults in the passenger seats. The throttle response is sharp while the steering wheel handling is nice considering that the Kluger is a relative beast on the road.

Suffice it to say that the Kluger may not have the most appealing of names among its competitors but its features and functions have certainly endeared it to the Aussies and the numbers speak for themselves – number three, mate, and closing in! You can also view the best 8-seater cars & people movers in Australia here.