Ford is known for manufacturing high quality vehicles and the Crossover Ford Explorer is no exception.

Over the nearly three decades that the Explorer has been sold, it has steadily moved from being a family-oriented car to one that feels more sophisticated.

While the Ford Explorer ranks in the top 20 of the most affordable 7 seater SUVs on the market today, majority of reviewers are in love with the roomy and attractive interior, while the fuel economy and the great handling also helped it to get great marks.

A standard V6 engine offers a reasonable amount of power to the driver while enhanced safety features bring it home for the Ford Explorer.

*MSRP: Is the starting price with excludes destination/delivery charge, taxes, title and registration. Optional equipment is also not included in the price.

What to Expect For The Explorer in 2016

To keep up with the growing competition, the 2016 model gets incredibly comprehensive refresh, with silky body, and comfortable interiors. The 2016 Explorer also comes with major improvements in the power train sector. 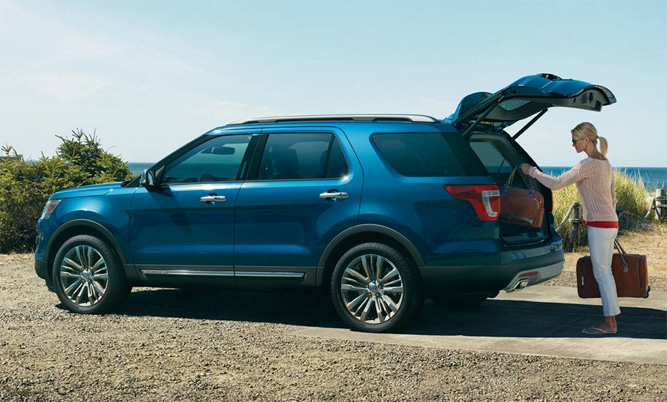 It is powered by a four-cylinder EcoBoost engine. The new engine addresses areas where its predecessors needed improvement.

On the exterior, the 2016 segment shares only its doors, glass and roof with the current model.

The taillights get a new 3-D element, while the rest of its rear end receive newly integrated exhaust tips, as well as a more sculpted tailgate with the subtle spoiler on the top.

The 2016 model will still be presented in XLT, base, or limited versions.

New for the 2016 model, however, is a the new Platinum trim level which adds eye-catching 20-inch wheels, satin chrome exterior finishes and a dual-panel moon-roof on the top.

A Fresher Look on the Interior

In the interior, the 2016 model has more finished and finely looks than ever before.

All versions of the 2016 Ford Explorer benefit from an extremely quieter cabin thanks to its improved door seals and the new engine sub-frame mounts that minimises vibration, but they do that on various options packages.

With the exception of the base model, all the other models come with acoustic glass for the front doors and windshield.

The interior is also packed with sound deadening, a distinct headliner to complement the upholstery, a Sony audio system, and an all-digital instrument cluster.

With the 2016 Explorer, the real buttons have replaced touch-sensitive buttons in most cases, and armrests have been adjusted and made softer.

The Explorer’s packaging goodness and spaciousness has been carried over.

For the first and the second row seating comfort, the 2016 model is one of the best cars in its segment, with fine ingress and egress, whilst the third-row seats are an excellent for large families.

That’s not all. Power-folding seats and hands-free tail gates are also available. 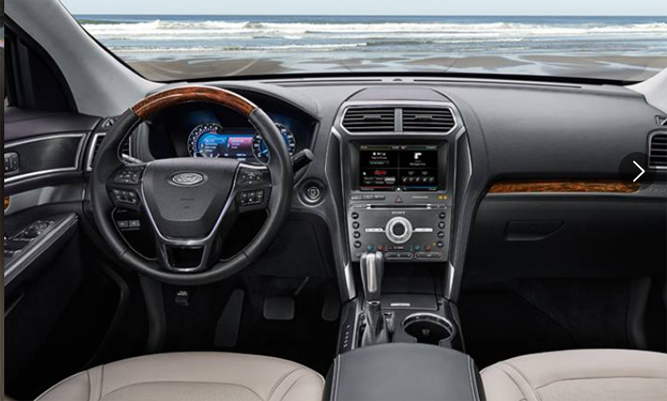 The 2016 Explorer is loaded up with features usually found on expensive luxury cars. Many of these features are found in the interior, like quilted leather seats, as well as satin-finished ash wood. For an auto maker that has been using plastic made to mimic wood on the interior of its cars, that’s a big deal.

Technology is a Big Feature

In terms of technology, Ford has really upped its game. It gets a system of ultrasonic sensors which helps you park your Explorer in almost any terrain.

It receives a standard rear-view and a front 180-degree camera to give you clear visibility around corners and out of the parking spots. The two come with a lens washer, a feature that has never been on any vehicle.

The Explorer also comes with a revamped Active Park Assistant which can semi-autonomously guide you into or out of a parking lot. Furthermore, new side sensors aids you figure out whether you are about to leave some paint samples in that parking garage.

Available USB ports on the second-row will charge your mobile phone at twice the speed of your preceding USB ports.

The 2016 Explorer comes with a four-cylinder engine.

When Ford replaced the engine it had used for many years, many people thought it was going to be a catastrophe. However, the new engine has proved the critics wrong.

The 2016 Explorer comes with the choice of three engines. They include;

It is also available in 4-wheel drive and front-wheel drive. A 3.5-liter EcoBoost V-6 engine is standard on the Explorer Sport as well as Platinum trim levels.

While Ford has been selling its Explorers for the last 25 years, the 2016 Explorer marks an important refresh for this generation thanks to its numerous improvements particularly in the power train department.